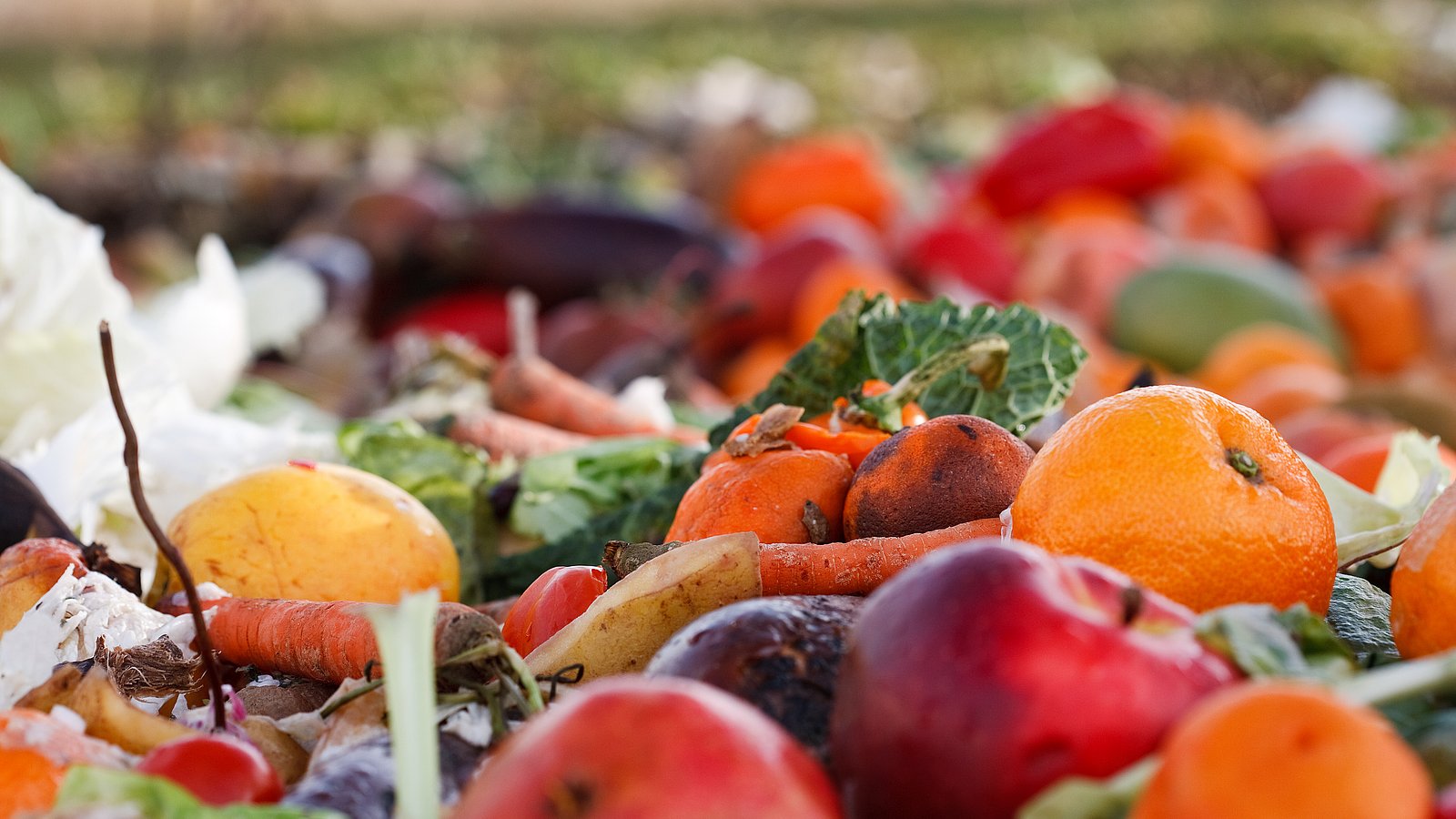 An Initiative of the Federal Government to avoid Food Waste

Too Good For The Bin

In February 2019, the Federal Cabinet adopted the National Strategy for Food Waste Reduction, which had been presented by Federal Minister Julia Klöckner.

The strategy identifies possible causes of food waste. It pinpoints challenges and spheres of activity to substantially reduce food waste along the food supply chain.

The aim is to halve per-capita food waste in Germany at retail and consumer levels and reduce food losses along production and supply chains, including post-harvest losses, by 2030. This is the stated aim of the coalition agreement and the United Nations 2030 Agenda.
The Länder, civil society actors, and associations from the agri-food sector, artisanal food production and the restaurant and catering sector were involved in the drafting of the National Strategy for Food Waste Reduction. The target agreements, measures and the progress of the strategy will be successively published on www.lebensmittelwertschaetzen.de.

In Germany, around 12 million tonnes of food waste are generated every year (as of 2015). If food waste in private households were reduced by 50%, greenhouse gas emissions in Germany could be cut by six million tonnes of CO2 equivalents, according to an expert opinion by the BMEL’s scientific advisory boards on food, agricultural and forest policies. Anyone reducing food waste hence makes an active contribution to resource conservation and climate stewardship.

Approach and participatory implementation of the National Strategy

The Strategy makes it clear that reducing food waste is a task for society as a whole.  Civil society, industry, administration and scientists are therefore called upon to contribute to the process necessary to fulfil this task.

The dialogue forums on primary production and processing

According to the 2015 Baseline Study, which the Thünen Institute drew up on behalf of the BMEL in 2019, the processing sector causes 18 % of the annual 12 million tonnes of food waste in Germany, while primary production causes 12 %.
On 28 January 2021, Federal Minister Julia Klöckner presented the certificates of support at the beginning of the dialogue forums on reducing food waste in primary production and in food processing: as coordinator, the German Agricultural Society (DLG) carries out the projects. Both dialogue forums are scientifically flanked by the Johann Heinrich von Thünen Institute with the aim of improving the data situation for these sectors.
An intensive exchange of information and experiences will be organised via ‘Round tables’ for the individual product groups. The dialogue forums will, in cooperation with the companies, identify specific measures for reducing food waste in primary production, processing and at the interfaces with upstream and downstream sectors; these measures will then be tested and evaluated in demonstration farms and companies. This will be used as a basis to conclude target agreements for reducing food waste in primary production and processing.

The dialogue forum for wholesalers and retailers

The dialogue forum for wholesalers and retailers was launched in September 2019. The BMEL has been supporting the dialogue forum since November 2019. As of January 2021, 21 wholesale and retail enterprises have marked their commitment to reduce food waste by signing an agreement on participating in the dialogue forum for wholesale and retail. Other enterprises can still take part.
The enterprises have so far met three times for working meetings - in Bonn in November 2019, and online in April and November 2020 - in order to draw up specific activities.
To portray the reduction of food waste in wholesale and retail over a longer period of time, the members have taken measures to improve the data situation and to add to existing sources of data.
The aim of the project is to draft a target agreement related to the trade sector. Support is also to be provided for data collection on food waste in the sector.

The away-from-home market has a great potential for saving 30 to 50 percent of food waste. This is shown by the results of the more than 400 waste measurements and analyses that United against Waste e.V. has carried out since 2014 in cooperation with different businesses. Waste measurements carried out on twelve model farms during the dialogue forum show an average reduction in food waste of 25 percent.

target agreement was adopted. The signatories agree to reduced food waste on 30  % by 2025 and on 50 % by 2030. Thereby, the agreement covers the breadth of this sector from company canteens, hotels, hospitals, retirement homes and schools.

The Federal Minister of Food and Agriculture, Julia Klöckner, thanked every participant and especially the model farms: “In order to reduce food waste, the area of out-of-home catering is an important multiplier. Whether in communication with own employees, guests or in society. The model companies have already succeeded in reducing food waste by a quarter on average. That is a success! It increases appreciation, saves costs and makes an important contribution to protecting the climate and resources. With the target agreement that has now been adopted, we are spreading the word. With the clear goal of halving food waste in this area by 2030.

Over half the food waste that accrues in Germany is produced by consumers in private households. The dialogue forum for private households will therefore identify promising approaches and measures to reduce food waste, test these in cooperation with actors already active in this field, and review their effectiveness using a standard method developed in the dialogue forum. The actors will be brought together for discussions in regular network meetings.
The dialogue forum for private households, supported by the BMEL since October 2020, is coordinated by the Ecologic Institute and conducted in cooperation with the Technical University of Berlin and with Slow Food Deutschland.

On 4.03.2020, Federal Minister of Food Julia Klöckner, together with the presidents and chairs of seven umbrella associations of the agri-food sector, trade, artisanal food production and the restaurant and catering sector, signed a general agreement on reducing food waste. This general agreement forms the basis for the cooperation in implementing the National Strategy for Food Waste Reduction.

On behalf of the BMEL and in cooperation with the University of Stuttgart, the Johann Heinrich von Thünen Institute (TI) calculated

food waste levels along the entire food supply chain for Germany. In doing so, European Union requirements were taken into account, which will ensure the future comparability of food waste quantities in the Member States, and which will act as the baseline for continuous reporting to the EU until 2030. The TI data were published on 12 September 2019 and form the working basis and benchmark to describe the progress made by the National Strategy for Food Waste Reduction.
The specific methodology for reporting to the EU is currently being developed.

Since 2019, the BMEL has been supporting the "eco-Plattform" project run by Tafel Deutschland e.V..
The

“eco-Plattform”, in the “Tafel macht Zukunft – gemeinsam digital” project, is intended to improve the interface between food-donating companies and the food banks, for example by improving digitalised delivery notes, and in this way simplifying the donation of unsold food that is still edible.

The "Too good for the bin!" initiative as a baseline

The BMEL launched the "Too good for the bin!" initiative in March 2012. This has focused the public’s attention on the issue of food waste and made consumers have a greater appreciation of food. Too good for the bin! is being continually expanded and extended to include the entire food supply chain.

More appreciation, less food waste!
Food waste is unacceptable from an ethical, ecological and economic standpoint. The Too good for the bin! Initiative has succeeded in recent years, through targeted, broadly disseminated information, to raise awareness of the value of our food and consequently to reduce waste.

In the coalition agreement, Germany once again stated its support for the United Nations goal, which was agreed upon in September 2015:

This is a very ambitious goal, and it will only be able to be achieved at national level with the collaboration of all stakeholders along the food supply chain. The Too good for the bin! initiative launched in 2012 is an integral component of the National Strategy for Food Waste Reduction".  Too Good for the Bin! is being continuously expanded and extended to include the entire food supply chain.

Through diverse activities aimed at a wide variety of target groups, the BMEL already offers support to anyone who values the sustainable, resource-conserving, and appreciative handling of food.

Too good for the bin! on the Internet

How much food is actually thrown away? What are the reasons why foodstuffs end up in the bin? And what can I do as an individual? The website provides consumers with answers and recommendations for action through simple tips, recipes to make the most of leftovers, and numerous join-in activities. Here, consumers can learn how they can easily reduce everyday food waste. There are some helpful tips at www.zugutfuerdietonne.de, with monthly key themes and a large information and service area. There are also school materials for years 3 - 6 and 7 - 9.

Too good for the bin! Federal Prize

With our “Too good for the bin!”

prize, the Federal Ministry of Food and Agriculture (BMEL) honours initiators of outstanding projects who contribute to reducing food waste through specific ideas, pioneering spirit, and great commitment. The prize is awarded to projects from a large variety of areas along the entire food supply chain: from production and trade to food processing in the catering sector and in private households. The competition is open to everyone: no matter whether it is a company, a caterer, an agricultural holding, a scientific institution, a private person, an NGO, a municipality, or an initiative – anyone can join in! The federal prize is awarded to one project from each of the five categories agriculture and production, trade, restaurant and catering sector, society and education, and digitalisation. There are additional funding prizes worth € 15,000 in total for concepts and projects at the launch or development stage.

The “Making the most of leftovers” app

A plate of pasta and some leftover vegetables from the day before in the fridge? The “Making the most of leftovers” app from Too good for the bin! shows what tasty dishes can be rustled up with them. In addition to 700 recipes, users can also find tips on avoiding food waste. All recipes are also available online on the Zu gut für die Tonne!  website. Futher information

Recipe videos in the #restereloaded series

What to do with leftover food? You-Tube videos with recipes offer clear assistance in cooking with leftover food and are published on the BMEL’s social media channels and by Too good for the bin!.Find the videos

The aim is to use the “making-the-most-of-leftovers box” (“Beste-Reste-Box”) to encourage catering businesses to actively offer guests the option of having their leftovers packed to take home. At the same time, guests are encouraged to ask for their leftovers to be packed for them to take home. The boxes can be purchased at Metro Cash&Carry.

The direct exchange of ideas between citizens is crucial to focus on food as a valuable resource in our daily lives. Additional events such as the Federal Government’s Open Day promote the active appreciation of food.

The agreed goals for reducing food waste can only be achieved if all actors along the value chain make their own specific contributions and if the overall awareness in society of the value of food increases. The www.zugutfuerdietonne.de website therefore not only gives tips and tricks for everyday life, but also provides information on the range of different activities taking place to reduce food waste. Take action!